La Cooperativa Agraria Cafetalera San Juan del Oro (CAC SJO or San Juan del Oro) was the first cooperative to be founded in Puno in southern Peru back in 1961. Coffee producers were in desperate need of stronger market access so the 40 founding members sought to improve the lives of farmers and their families by establishing the group.

The 1,200 members of CAC SJO are from indigenous communities located in the rural Tambopata and Inambari valleys. They often work following traditional farming systems and work closely with their neighbours and family members to look after their farms and complete the coffee picking and processing during the harvest.

The start of the pandemic in April – May 2020 was very hard for the region. Shops were closed and there was no transport between the provinces and towns which led to a shortage of food. For San Juan del Oro members it was a lesson teaching the importance of diversification. Farmers who were growing food crops alongside coffee, many of which they could sell locally, were doing better financially and could also support their own family’s nutrition.

How has Fairtrade supported farmers in 2020?

Previous to the pandemic, one of the key areas of focus for San Juan del Oro was improving quality and productivity of their coffee using sustainable farming techniques. For example, they invested a large proportion of their Fairtrade premium in supporting farmers through workshops and technical assistance. This helped them to understand how to combat problems such as the coffee disease, la roya, or to adapt to climate change.

Sadly the effects of climate change have become more and more apparent here in recent years. Erratic weather patterns such as heavy, unpredictable rainfall has led to several landslides in the area which have destroyed houses and farms. There are now longer periods of very hot, dry weather, a change in temperature that prolongs the harvest – it used to last up to two months and now spans over 4 to 5 months.

To further support the group to adapt to a changing climate, San Juan del Oro partnered with Matthew Algie, and other organisations including retailer Marks and Spencer, coffee roaster Taylors of Harrogate and another Peruvian cooperative, Pangoa, in a project that aimed to increase the resilience of coffee farming. 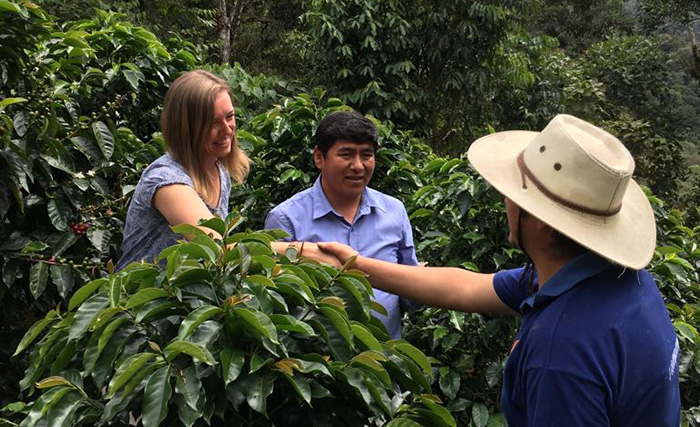 Across the project, 1573 farmers were trained in sustainable and climate-smart coffee production through the cooperative staff and the networks of Farmer Field Schools that were set up. Farmers produced over 1800 tonnes of compost and 31,000 litres of organic liquid fertilizer in three years. As a result of the increased access to inputs as well as the training in improved farming techniques, their coffee yields have increased by 56.8% (from an average of 10.5qq/ha to an average of 15.92qq/ha).

New and sustainable ways of working

The programme helped San Juan del Oro and Pangoa to adopt innovative approaches to sustainable agriculture which are still being used today and have supported the group in their aim to become more resilient to climate change, especially in the face of other difficulties such as the COVID-19 pandemic.

The sustainable agriculture practice of applying liquid fertilisers (‘bioles’ in Spanish) to the coffee plants has been a great success and has been pioneered in the region by the technical staff at San Juan del Oro. It is now becoming a widespread practice in the region as people are seeing the positive results and wanting to replicate the same method both in their farms and in other organisations.

Jhon Reynaldo Vilca Cosi is the Manager of Production and Projects says, “I think we are the first to do this practice in this region of the Tambopata Valley. Using the materials that you gain through the fermentation process of the honey water. When we introduced this three years ago this was definitely something new for the producers, and the other farms where we have introduced this application, nowadays it has spread and actually other organisations are practising it.”

Mateo Quispe Capajaña is the General Manager says, “All of the NGO’s, projects, municipalities are talking now about liquid fertilisers and their applications, and we are really proud of this.” 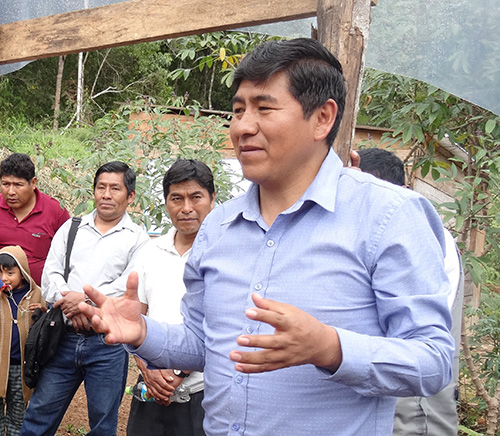 Another innovation that has been successful has come in the shape of the discovery of a new coffee leaf rust resistant variety called Catur Chambi* by the farmer and San Juan del Oro cooperative member Juan Aguirre Chambi Mamani. This variety has since been planted in around 10% – 15% of the region of Puno.

Mateo believes the success of the project is reflected in the fact that there are now many Government projects also buying the variety.

Jhon feels proud of being part of this successful work and the cooperative is seeing positive changes in quality and quantity through these practices becoming more widespread amongst their members.

Jhon says, “These practices have increased our level of productivity from 10 quintales before and today we are surpassing 15 quintales… The quality of the coffee is changing, before our cup score was always ranking at around 76, 77, and in the last few years in our most recent records that we have done with our cupper, all of them are scoring 80 points and up. So through the trainings we are instructing the producers to do this in order for there to be both a greater yield and a better quality of coffee.”

*Named after the farmer who after coffee leaf rust selected, multiplied and spread this unique resistant plant variety