Biting Back at The Climate Crisis with Fairtrade Cocoa

Home » Biting Back at The Climate Crisis with Fairtrade Cocoa

Biting Back at The Climate Crisis with Fairtrade Cocoa

Farmers and workers around the world are on the front line of the climate crisis, from rising temperatures and changing weather patterns to deforestation and water scarcity. Many farmers in countries vulnerable to climate change say it’s the biggest challenge they face right now – and they’ve done the least to cause it. With the climate crisis increasingly threatening their livelihoods, it can be hard for farmers to fight back. Particularly when they’ve been on the receiving end of decades of poor prices for their crops, and paying for daily basics is already a struggle.

Natural Disasters during a Global Pandemic

At the end of 2020 and in the midst of a global pandemic, Hurricanes Eta and Iota swept through Honduras leaving destruction and heartbreak in their wake. Farmers at Fairtrade certified co-operative COAGRICSAL were faced with widespread flooding, landslides, roads cut off, crops destroyed… the true cost is yet to be counted.

“There are no words to describe what has happened; where our producers have lost so much, their farms, homes and families,” says Óscar Serrano, one of the co-operative’s founders. “It is sad and painful to see everything destroyed”.

But the hurricanes won’t be the first time the enterprising cocoa and coffee farmers have fought back against the climate crisis. By harnessing the unique power of Fairtrade, they’ve been able to not only create new ways of making money but protect the environment, too, by diversifying into a revival of cocoa production.

In the heart of Copán – home of Mayan ruins and the birthplace of cocoa – the new Xol chocolate factory was up and running in early 2020. The factory, the largest of its kind in the region, was built using Fairtrade Premium, the extra money farmers get on top of their Fairtrade sales, to invest in projects of their choice. The venture began as a response to the droughts and diseases caused by climate change, and how they are affecting coffee crops.

Speaking before the hurricanes hit Honduras, Marlene Soriano, COAGRICSAL’s administrator, explained that the ‘co-op members continue to suffer huge losses in coffee, from the coffee tree rust fungus, irregular rains, prolonged dry periods, all directly related to climate change.’ The farmers realised they needed to diversify to avoid depending only on coffee, with cocoa able to grow in many of the places coffee is most affected. Marlene explained: “Cocoa is more resistant to the changes in the climate, and the market prices are more stable. For our farmers, cocoa represents a more reliable future, and it’s better for the climate”

The co-operative opened up a huge programme of nurseries to grow grafted, gourmet cocoa plants, funded in part by the Fairtrade Premium. The farmers have planted more than 1.2 million cocoa trees and another 300,000 canopy trees to shade the cocoa to date. As well as keeping off the increasingly hot sun, the canopy trees provide defence against soil erosion, soak up CO2, provide food and habitat for wildlife, and sometimes food or extra income for farmers.

It is a striking response to climate change, but it is perhaps even more extraordinary – in an area where gender roles can be traditional – that the Xol factory is managed and operated by young women, giving them decision-making power, and positions of responsibility.

Alejandra Lemus, 24, is in charge of production in the factory. She has a team of other young women operating machines, producing cocoa liquor and chocolate bars, in a huge spotless factory hall.

“We are also making bars of chocolate and specialty chocolates for export and the national market,” says Alejandra. Alejandra and some of the other women have trained as chocolatiers, confident they can meet the standards of any Belgian or Swiss brand.

There has been a ripple effect. “Giving women the chance to take key positions of responsibility, and taking serious action on the climate is not just good for us,’ says Alejandra. ‘It’s good for our families and our communities, for everyone.”

As many of the women are likely to have been affected by the devastating impact of the hurricanes, it remains to be seen how the coming months will unfold, from cocoa growing on the farms to production at the chocolate factory – all set against the enduring Covid-19 pandemic.

But what is clear is that when you choose Fairtrade, you’re offering farmers and their communities more choices about how to respond to the challenges of the climate crisis. You’re choosing the protection of a minimum price, and the power of the Fairtrade Premium.  You’re also supporting Fairtrade’s work to find new ways to battle the challenges of climate change.

As one of the farmers at COAGRICSAL said in a recent update on the storm damage: “We are Hondurans; dreamers and fighters. We will get up.” 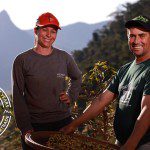 We here at Matthew Algie are incredibly proud of the... 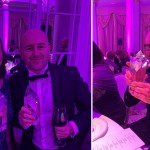 We are delighted to have been named the Best Coffee...

Sustainability is at the heart of everything we do here... 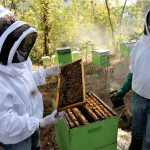 Coffee Sourcing and our Producers

Home » Biting Back at The Climate Crisis with Fairtrade Cocoa